“Resting on yesterday’s victories is simply flirting with tomorrow’s failures.”

2 Samuel 11:1 – “In the spring, at the time when kings go off to war, David sent Joab out with the king’s men and the whole Israelite army. They destroyed the Ammonites and besieged Rabbah. But David remained in Jerusalem.”

Luke 12:15-21 – “15Then he said to them, Watch out! Be on our guard against all kinds of greed; life does not consist in an abundance of possessions.” 16And he told them this parable: “The ground of a certain rich man yielded an abundant harvest. “17He thought to himself, ’What shall I do? I have no place to store my crops.’ 18”Then he said, ‘This is what I’ll do. I will tear down my barns and build bigger ones, and there I  will store my surplus grain. 19 And I’ll say to myself, ‘You have plenty of grain laid up for many years. Take life easy; eat, drink and be merry.’ “20But God said to him, ‘You fool! This very night your life will be demanded from you. Then who will get what you have prepared for yourself?’ 21”This is how it will be with whoever stores up things for themselves but is not rich toward God.”

Matthew 10:20 – “For it will not be you speaking, but the Spirit of your Father speaking through you.”

Tonight I would like us to focus our attention on 2 portions of scripture as we discuss the topic of “When failure follows success!”

I would like to look at the life of King David in the Old Testament; how his success in life led to his failure….

And also reading from the New Testament from the book of Luke, chapter 12:15-21 the parable of the rich man, of how his success in life became his very down-fall; and how we should be on the lookout for this as well. Amen?

Right from the very 1st mention of King David in

1 Samuel 17:14 -“David was the youngest, the tree oldest followed Saul.” to his death in

1 Kings 2:10 -“Then David rested with his ancestors and was buried in the City of David.”

We will find many accounts of many great battles won by King David son of Jesse.

But for many people, only 2 things about his life will come to mind, if you should be asked about him (anybody?)

The 1st thought about David must surely be when he, as a young boy killed the lion and the bear and how that prepared him for his greatest success killing the giant Goliath! (What a story!)

The 2nd and “infamous achievement” in the life of King David was when he sinned with Bathsheba, killed her husband and failed dismally!!

So the next question will naturally be; How did his success become a failure?

The answer (briefly) to this is found in

to go to war, David stayed in Jerusalem.

You see church, it wasn’t about his decision but the condition of his heart that got him into trouble; it was the state of comfort and complacency (gemaklik en oorgerus) that led to his failure!

Please take note and take this to heart church!

This rich man was in the world’s standard a successful man! He has made it in life, and could proudly point to his great harvest and people would admire his new buildings!

Banks would seek his accounts and parents would use him as an example for their children and the world indeed call him a success.

But why, church? Many would say that this man is one of the finest in our community, a role model to many!

This man was rich and successful; he knew how to accumulate wealth in the right manner.

He had come by his wealth honestly he didn’t bribe or take bribes, neither was he connected to any well known family –n-all!

So what was so wrong with this rich successful man that God called him a fool?

Listen carefully to what he was saying…

It reveals a complete omission of God from his plans, there is no mention of God at all! God doesn’t feature in his plans….
He failed to recognize God as his source the Ultimate Provider but instead counted on his own successes, achievements and intellect to ‘get the job done’

(Frank Sinatra syndrome: I did it my way!)

This rich man was backed by the success of his past, to make plans for the future… (anybody?)

The scripture revealed that this rich man forgot about accountability to God he lived as if there were no God; so is there any wonder that God called him a fool? The Bible says: that only a fool will say in his heart: There is no God!

Psalms 53:1- “The fool says in his heart, ‘There is no God.’ They are corrupt and their ways are vile; there is no one who does good.”

Psalms 14:1 –“The fool says in his heart, ‘There is no God.’ They are corrupt, their deeds are vile; there is no one who does good.”

“Me, I, Mine, Myself” are repeated again and again, a sure sign of a self centered person! Amen?

The conversation of the rich man also revealed a covetous heart. He has become a victim of his desire to possess… to have more and more and not be happy and content with what he had.

How many times do we hear people say: “I will be happy with a new job, new car, moving house, finish school and get my diploma, ect, ect….

Although these things may fit well into the picture of real “happiness”, true happiness can only be found in Jesus Christ!

He was is and always will be the only source of true happiness to the human race. Amen Church!

You see, it was after the rich man made all his plans that God spoke : verse 20 – “you fool”

Mark 8:36 – “What good is it for someone to gain the whole world, yet forfeit their soul?”

Matthew 16:26 – “What good will it be for someone to gain the whole world, yet forfeit their soul? Or what can anyone give in exchange for their soul?”

For what does it profit a man to win the whole world (to be successful in all he does), but loose his soul?

Conclude: Do not allow the success of your achievements in life, to become the reason for your failure in life… It is good and commended to achieve in this life, but even more profitable to invest for the life to come!

The Ingredients of a Grateful Heart. Two hearts – Grateful & Ungrateful The way you keep your tank full is to always […]

The Ingredients of a Grateful Heart. Two hearts – Grateful & Ungrateful The way you keep your tank full is to always be THANKFULL. Where do you mostly focus? By… 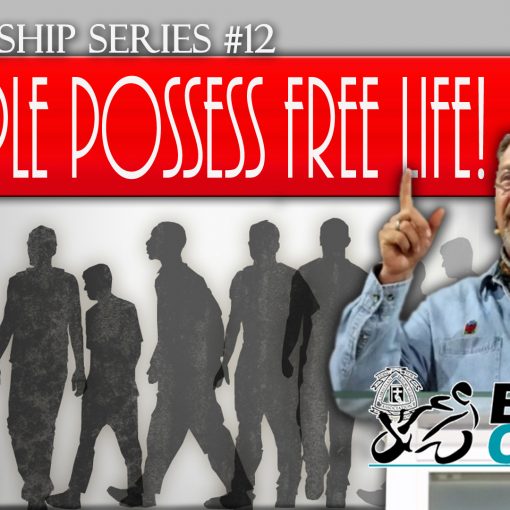 Discipleship series
[yotuwp type="videos" id="TyRxYoTOA3w" ]Discipleship Series #13 A Disciples Heart Was Made For INTIMACY WITH GOD By Pastor George Lehman (Our heart was made to be God’s home.)   The word…

The kind of People Nobody Can Help None of us are hopeless – Unless we choose not to change. Pastor George Lehman […]

The kind of People Nobody Can Help None of us are hopeless – Unless we choose not to change. Pastor George Lehman “Making a wrong decision is understandable. Refusing to…

Discipleship series #8 A disciple lives actively and effectively in the moment. By Pastor George Lehman   Yesterday is history. Tomorrow is […]