A disciple responds positively to testing. (The character test.)

James 1:12 “Blessed is the one who perseveres under trial because, having stood the test, that person will receive the crown of life that the Lord has promised to those who love him.”

Genesis 22:1-2 “Sometime later God tested Abraham. He said to him, “Abraham!” “Here I am,” he replied. 2 Then God said, “Take your son, your only son, whom you love—Isaac—and go to the region of Moriah. Sacrifice him there as a burnt offering on a mountain I will show you.”

Deuteronomy 8:2 Remember how the Lord your God led you all the way in the wilderness these forty years, to humble and test you in order to know what was in your heart, whether or not you would keep his commands.”

I hope I shall possess firmness and virtue [goodness, uprightness, moral excellence] enough to maintain what I consider the most desirable of all titles – the character of an honest man. George Washington

Character means the combination of qualities or features that distinguishes one person from another.

What do you think that distinguishing mark in a disciple’s life should be?

Colossians 3:10 (Amp) – And have clothed yourselves with the new [spiritual self], which is [ever in the process of being] renewed and remolded into [fuller and more perfect knowledge upon] knowledge after the image (the likeness) of Him Who created it. God is serious about our growth

Why a character test?  Christians are to be good news before they share the good news.

Most people won’t come right out and say it, but you’d better believe they’re thinking it – they’re not interested in committing their lives to Jesus Christ unless they observe attractive, qualities and consistent patterns of living in a Christian life that they know.

Living a double standard life will never draw anyone to Jesus

2 Peter 1:5 (Msg) – So don’t loose a minute [i.e. use every second] in building on what you’ve been given, complementing* your basic faith with good CHARACTER, spiritual understanding.

*To spend a long time thinking about your action

We have taken off the old way of living, thinking, and acting… Have you?

Here’s the reason why God gives us ‘the character test’:

Ephesians 4:24 (Msg) – And working itself into your conduct as God accurately reproduces* His character in you.

*To produce a copy of something

Romans 8:29 “God pre-destined us to conform to the likeness of His Son.”

God is redoing His original plan in us!

How sad is this: The universe seems bankrupt as soon as we begin to discuss the character of individual lives.

So many Christians are bankrupt of Character

Luke 8:13 “Those on the rocky ground are the ones who receive the word with joy when they hear it, but they have no root. They believe for a while, but in the time of testing they fall away

Nothing is so fatal to character as compromising of principles.

Check who you mostly hang around with it will tell you where you’re headed.

Definition:  In the character test, a disciple is surrounded by ungodliness, compromise and shortcuts that attempt to pull them in its direction.  These may tempt the disciple to sin in various ways to weaken their character.

God puts His disciples in fiery places so they may learn to stand strong in Him.

You cannot dream yourself into a character – you must hammer and forge yourself into one. It takes sacrifice, dedication, commitment and focus

Good character is more to be praised than outstanding talent.

Most talents are to some extent a gift.

Good character, by contrast, is not given to us.  We have to build it piece by piece – by thought, choice, courage and determination.

The potential to fail and mess up is strong and very real.

Purpose:  The character test shows to the disciples the areas of weakness in their own personality, in what they stand for.

Character is like the foundation of a house – it’s below the surface.

When God allows a situation into a disciple’s life which requires patience, resistance to temptation and steadfastness you realise you must call on more of God’s grace.

Usually an area of need surfaces where you must allow God to work.

Every disciple has hidden character deficiencies (Blind spots) of which he is totally unaware until confronted with a character test that will call for a Godly response.

This will expose your own true inward self.  “The true you.”

It slips away little by little under the constant pressure of an unguarded lifestyle.

Interestingly this erosion of self control (character) is most likely to happen in those areas where you think you are strongest and feel most confident and secure. (Happens many times in older Christians) You can’t go on old energy and anointing.

All of a sudden God exposes your true character to you – just when you thought you were on top of things.

Romans 5:4 (Amp) – And endurance (fortitude) develops maturity of character (approved faith and tried integrity) and character (of this sort) produces (the habit of) joyful and confident hope of eternal salvation.

Isaiah 59:19 says – when the enemy comes in like a flood, the Spirit of God will raise up a STANDARD against him.

Where on earth do you think the Standard will be raised if not in the life of a child of God.

Character is the standard which destroys the enemy.

How is your character?

This is not a trick question which demands an honest answer

The true disciple will watch over himself when he is alone.  He examines his heart that there may be nothing wrong and that he may have no cause of dissatisfaction with himself.

Psalm 25:21 (NLT) – May integrity and honesty protect me, for I put my hope in you. How protected are you by your Honesty and integrity

Action, looks, words, steps – form the alphabet by which you may spell CHARACTER.

For those of you that have been serving the Lord for a number of years, remember, the higher the character the more you should regard your smaller actions.

Character is made by many acts.  It may be lost by a single action.

The favour and blessing and prosperity and provision of God rest upon the disciple of character.

Isn’t it amazing – God will allow a ‘character test’ to develop character in us and then He goes out of His way to bless that character?

God doesn’t want to hurt us but He knows what’s good for us.

Psalm 84:11 (Amp) – For the Lord God is a sun and shield; the Lord bestows (present) grace and favour and (future) glory (honour, splendour and heavenly bliss)!  No good thing will He withhold from those who walk uprightly.

How have you been responding to tests, hardships, difficulties, tough situations.

If you’re not happy with your actions, speech and behavior Repent and ask God to change you. 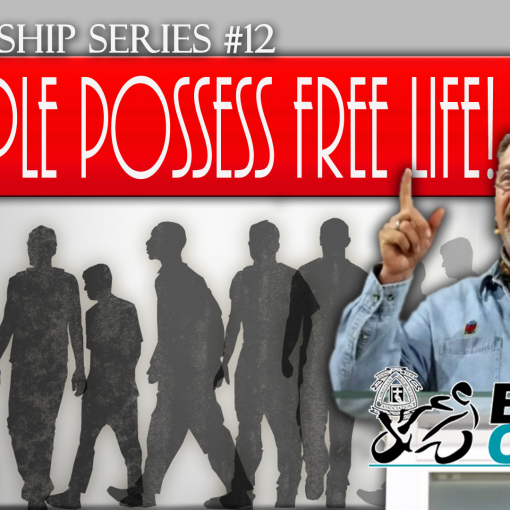 There are very few things as Free as LIFE in this world, yes JESUS CHRIST came to liberate us completely, to complete us with the indwelling of HIS HOLY SPIRIT, with it comes HIS Unconditional Love, live LIFE as he showed us.

Discipleship series
There are very few things as Free as LIFE in this world, yes JESUS CHRIST came to liberate us completely, to complete us with the indwelling of HIS HOLY SPIRIT, with it comes HIS Unconditional Love, live LIFE as he showed us.

God has given us each 24 hour day in which to fulfill our calling. “It’s the business of every committed disciple to […]

God has given us each 24 hour day in which to fulfill our calling. “It’s the business of every committed disciple to increase his abilities, capabilities, talents and gifts to…

Esther (Ch 1-10). The story of a young Jewish woman who saved a nation. This Evening I would like to talk about […]